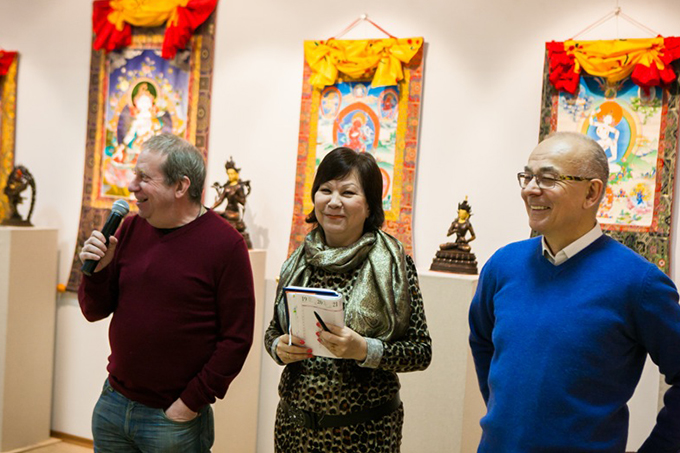 The history of Buddhism in Russia goes back officially almost three centuries to 1741, when Empress Elizabeth decreed Buddhism to be one of the official Russian religions. Buddhism was present in the former Soviet Republics of Turkmenistan, Uzbekistan, Tajikistan, Kyrgyzstan, and Kazakhstan. In areas inside the present-day Russian Federation such as Kalmykia and Buryatia, Vajrayana (Diamond Way) Buddhism of different schools including the Karma Kagyu has been practised since at least the 13th century.

All religions, including Buddhism, were suppressed under the Soviet Union. When the Soviet Union collapsed, the freedom to practise Buddhism gradually appeared again, and among the first to start Buddhist centers where people could practise lay Buddhism was Lama Ole and Hannah Nydahl. In 1989, Lama Ole and Hannah visited St Petersburg, and gave teachings and Buddhist Refuge. Soon afterwards, a Buddhist center was established there, and today one can speak of a renaissance of lay Buddhism – more than 70 Diamond Way Buddhist Centers representing the Karma Kagyu lineage in Russia have been started, all across the country.

In 2014, the 25-year anniversary of this renaissance was celebrated. Lama Ole Nydahl’s visit to Saint-Petersburg became the main event of “Buddhism.ru”, the 5th International Festival of Tibetan Buddhism in Russia. For ten days, those interested could acquaint themselves with the past and present of Buddhism in Russia through films, lectures, and art exhibitions, and three thousand people took up the invitation.

Running for the length of the festival, an art exhibition “Treasures of Buddhism: a living tradition” and photo exhibition “East and West: the path of fearlessness, joy and compassion” were held in a gallery in the center of the city. Visitors to the exhibition had the chance to see artifacts of Buddhist art of rare artistic and historic value. Among the exhibition of 200 artifacts from Tibet, Bhutan, Nepal and India were statues and thangkas from the private collections of St Petersburg residents. The cultural connections of Russia and the Buddhist East were illustrated in the work of Western and Russian photographers. Lectures on Buddhist art, architecture, and symbolism, Tibetan medicine, and film viewings supplemented the exhibition. A documentary film about Buddhism in the modern world was shown, and the audience asked questions of the director and others who had taken part in the filming.

A round table discussion was dedicated to the subject “Lay Buddhism: History and Modernity”, a very topical subject. The round table was held with the participation of the heads of large Buddhist organisations in the city: the head of the main Buddhist temple in St. Petersburg, the “Gunzechoinei Datsan“, B.B. Badmaev, and the president of the Association of Diamond Way Buddhism in Russia A. Koybagarov; the consul of India Mr Amar Kant Dan; the PA of the general consul of India in St. Petersburg A.A. Grigorjev; as well with outstanding scholars, philosophers and public people. The round table reports will be published as a part of the fourth International Research and Practice Conference “Vajrayana Buddhism in Russia: traditions and innovations“, which will take place on September 23-26, 2014 in Elista in the Republic of Kalmykia. Lama Ole Nydahl made a speech on the topic of “Mahamudra: the Great Seal in the modern world” and answered the questions of the participants. 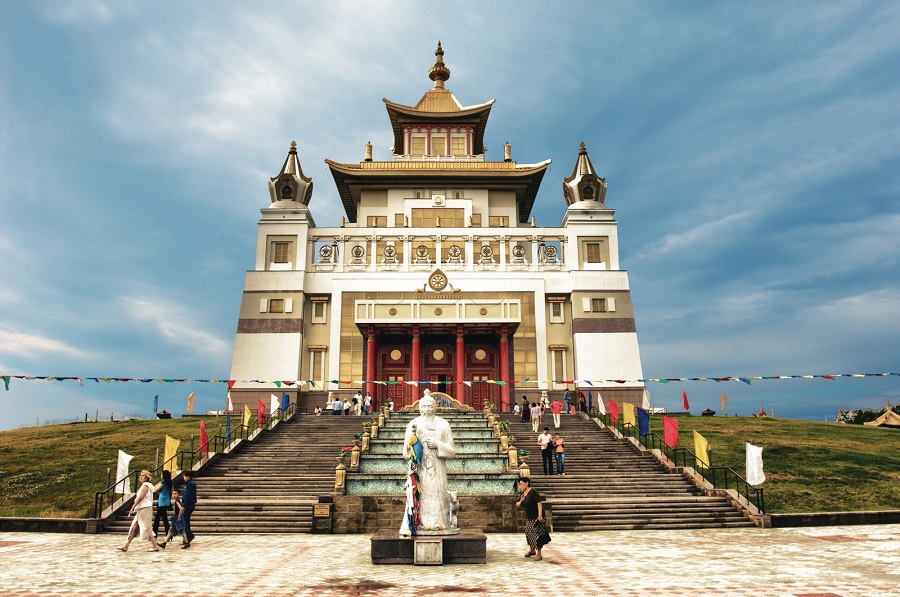 Meeting of scholars, traditional Buddhists and lay Buddists in Russia

The round table of Buddhologists and practitioners

At the end of the festival Lama Ole Nydahl gave a lecture on “Buddhism in the modern world”. Lama Ole was in St Petersburg as the first stop on his annual tour of Russia, which this year went by train from St Petersburg to Vladivostok. Over 300 people from 29 countries joined the tour, with lectures and meditation courses taking place at each stop. As part of the tour, Lama Ole and friends went on to visit the many Russian Diamond Way Buddhist centres, and again visited the Hambo Lama, the head of the Traditional Buddhist Sangha of Russia and the highest lama of the Buryats, at the Ivolginsky Datsan, outside Ulan Ude, in Buryatia.

Krasnoyarsk, one of the many stops on the Russia Tour

Plans for the Izhevsk Buddhist centre in Russia

A lecture on the Russia tour

A view of the Siberian countryside from the train

Lama Ole & the Hanbo Lama, head of the traditional Buddhist sangha in Russia

With the Hanbo Lama in Buryatia on the Russia tour

A special anniversary: On the birthday of Lama Ole Nydahl

19 March is a special day for tens of thousands of Buddhists worldwide. On this day eighty years ago, Lama Ole Nydahl first saw the light of day in Copenhagen. Eighty very diverse, moving and eventful years in which a … Continued