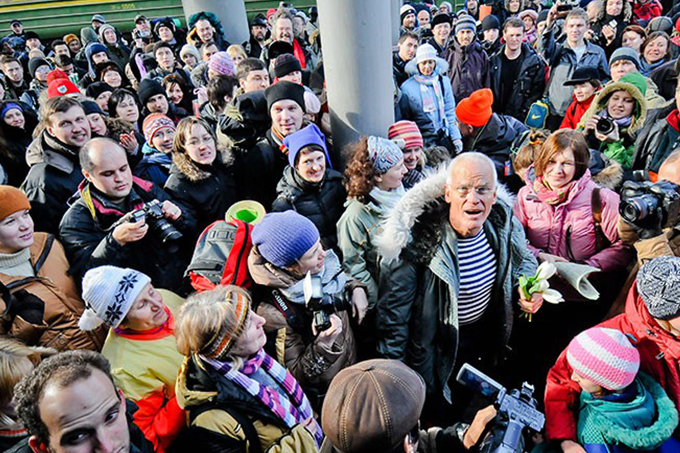 For the 23rd time since 1992, Lama Ole Nydahl and several hundred of his students traversed Russia on the Trans-Siberian Railway in the middle of winter. Moscow greeted the travelling group with heavy snow and mild temperatures, as Lama Ole flew in from Israel, having given a meditation course on the Great Seal, the highest level of Buddha’s teachings.

This January brought unusual warm temperatures, from +2 (Moscow) to -25°C (between Irkutsk and Vladivostok), and our travelling group of 300 friends – equipped and ready for a polar expedition – sometimes made an entertaining picture for the local Russians, for whom the climate was rather like autumn. Going the whole 9,500 kilometers from West to East by train brought us to Chelyabinsk, Novosibirsk, Irkutsk, and Vladivostok, with a following visit to Kamchatka.

In Moscow Lama Ole shared his deep insight into the Mahamudra teachings, with over 2,500 people joining the lecture. Here Lama Ole and his wife Alexandra received a beautiful gift from Lama Ole’s Russian students displaying Russia and containing gemstones and precious metal as symbols for the cardinal directions and levels of development of mind on the Buddhist path.

After three days in the Russian capital, our travel-group set off, occupying the larger part of a Trans-Siberian train for the two days to Chelyabinsk. Again many students gave an overwhelming welcome to Lama Ole and all the students traveling with him. There were a thousand people at the lecture in Chelyabinsk, and many students joined for a day visit to the Arkhara retreat center.

The local Ural groups and centers presented their latest developments to Lama Ole on a bus drive to the Diamond Way Buddhist retreat center and we entered the snows of the Urals region. It felt already like home to be back in the train for the rather short 24 hours’ travel to Novosibirsk. Lama Ole visited the Buddhist Center of Novosibirsk and gave lectures to over 700 people.

Two more days in the train and we were in Irkutsk. Here, Lama Ole shared in three lectures his commentary on the traditional Mahamudra teachings of the 3rd Karmapa, and the Ganges Mahamudra by Tilopa. Leaving Irkutsk, we were up to a three day and night-long stretch to Vladivostok. Lama Ole and the team found time for lots of work as well as personal interviews. Students spent many hours meditating on the gently rocking train crossing Siberia. The wild vastness, the endless snows and the absence of one’s habitual surroundings are good circumstances to look inside and work with what comes up.

The Diamond Way Buddhist Center in Vladivostok is both impressive and welcoming. It can host many visitors, and after a short night we took off – now by plane – to Kamchatka! Kamchatka reminded us in a way of Russia in former times. We stayed in a vacation-resort and after a quiet night it started to snow. And it snowed. Locals told us that the amount pouring down was unusual for this time of the year and when the sun came through the next day, at least a meter of fresh snow on top of the old half meter glinted under a blue sky.

The lecture on the second evening in Kamchatka in an old theatre was well-visited. Many curious, fresh people listened to Lama Ole’s introduction lecture and Diamond Way Buddhism came to this Far East part of the world where many now took the Buddhist Refuge.

Back in Vladivostok a lecture on the Mahamudra text of the 3rd Karmapa was held by Lama Ole in a theatre around the corner from the Buddhist Center. In the evening a party for everybody was organized to celebrate the end of the Winter Tour 2015, which was as unique and unusual as every single one before.