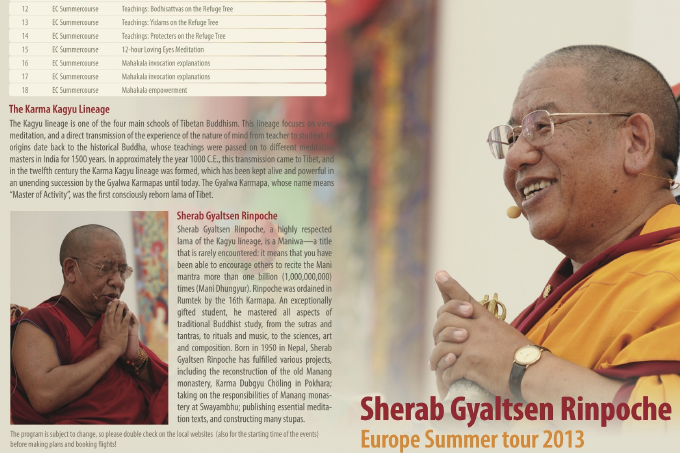 Our great teacher Sherab Gyaltsen Rinpoche has started his 2013 tour of Europe by visiting Buddhist centres in Germany and Denmark.

Sherab Gyaltsen Rinpoche is a traditionally trained Buddhist lama from Nepal, who has spent decades in meditation retreat. Ordained as a monk by His Holiness the 16th Karmapa, Rinpoche has devoted his life to the Buddhist teachings, especially in his native Nepal, where he runs several monasteries. Rinpoche has come several times to the West, and has been hosted in many of our Diamond Way Buddhist centers and taught at many of our meditation courses.

Starting on the 11th July in Hungary, Rinpoche will teach in Becske, where there is a Buddhist stupa overlooking the grounds of the course. After four days in Slovakia, at the remote retreat center of in Mangutovo, Rinpoche then stops off for a teaching in Vienna, Austria. After a quiet visit to the Tenovice center in the neighboring Czech Republic, Rinpoche will go to London, and then for four days in Lithuania.

After a quick stop in Riga, Latvia, to give an empowerment, Rinpoche will arrive at the International Summer Course in the Europe Center for a whole week of empowerments and teachings, where Lama Ole Nydahl will also teach.

You can see the full itinerary by downloading the PDF of Sherab Gyaltsen Rinpoche’s 2013 tour.

This year marked 10 years of the Summer Course at the Europe Center, and 25 years of the annual course, previously held near Kassel Germany. Over 3,500 Diamond Way Buddhist practitioners from more than 50 countries attended. We had a … Continued