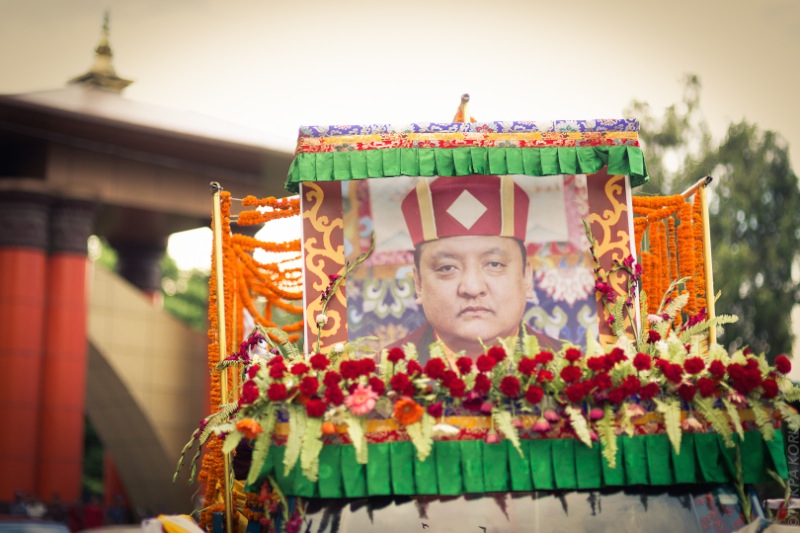 The late 14th Shamar Rinpoche had a fondness for the country and people of Nepal. He made great efforts to establish a monastery at Shar Minub, in Kathmandu, for the benefit of Buddhist students in Nepal. And it was here that he asked to be taken after his death, for the ceremonial cremation that is the traditional farewell for high Buddhist lamas.

Historically, Nepal has always been an important place for Buddhism. The Buddha himself was born in Lumbini, in today’s Nepal, and the Shamarpas have for centuries held a close relationship with Nepal. Among many other connections, the 8th Shamarpa was born and the 10th Shamar Rinpoche cremated there.

“Spirituality is beyond nationality. Shamar Rinpoche was a great example of that, devoting his life to work for the benefit of others in the whole world – be it Nepal, Europe or America – without discriminating who comes from where. His last wish to rest after his passing in Kathmandu should be respected. His resting place will become an international pilgrimage place important not only to Rinpoches’ followers but to all Buddhists. Thus everybody, including Nepal, will benefit. It is actually an honor for the country”

After the government of Nepal granted the necessary legal permissions for Rinpoche to be cremated there, Rinpoche’s kudung arrived in Nepal on 29th July, greeted by throngs of well-wishers. The cremation will be on Thursday morning, 31st July. It will be streamed live at: http://sharminub.org/events-2/streaming/

Below are some of the photos from Rinpoche’s arrival in Kathmandu:

Begun this year in earnest, the renovation of the Swayambhu Monastery belonging to HH 17th Karmapa Thaye Dorje has already brought great results. Essential works such as the water and wastewater infrastructure have been completed. The roof is now waterproof, … Continued

H.H. Karmapa Thaye Dorje, the head of the Karma Kagyu lineage, yesterday announced that it is his “solemn duty and responsibility alone to find the authentic incarnation of His Holiness Kunzig Shamar Rinpoche”. The 14th Shamar Rinpoche, Mipham Chokyi Lodro, … Continued

Western Buddhist organizations representing more than 700 Buddhist centers, monasteries and institutes of the Karma Kagyu tradition have requested their spiritual leader, His Holiness the 17th Gyalwa Karmapa Thaye Dorje, to recognize the 15th reincarnation of the recently deceased 14th … Continued