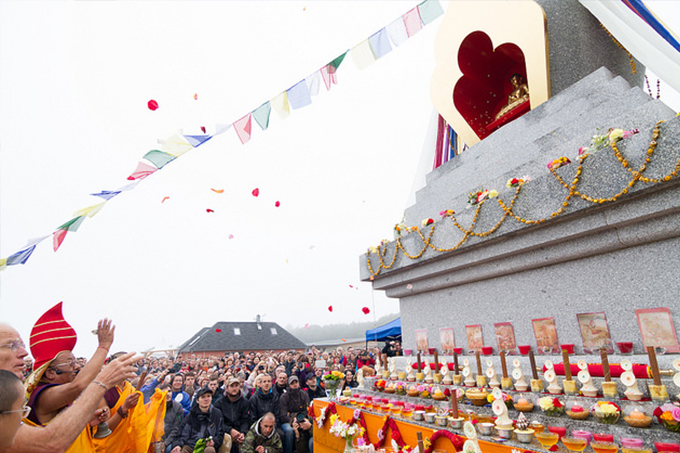 Two decades after the first public lecture of Lama Ole Nydahl in Prague, the first stupa was inaugurated in the Czech Republic. It is a 7-meter high Enlightenment Stupa in Tenovice, the main meditation retreat center of the Czech Republic. The stupa was built by Maniwa Sherab Gyaltsen Rinpoche, with the assistance of Lama Ole Nydahl and his students.

It is hard to imagine a better celebration of 20 years of Buddhism in the Czech Republic than the inauguration of a stupa. Over 2,000 people gathered on the 14th September 2014 in Tenovice, the venue for all the summer meditation courses in the south of the Czech Republic, to participate in the event. Despite the rainy weather, people joyfully enjoyed the inauguration.

What is a stupa?

Of the eight types of stupas, the Enlightenment Stupa in particular reminds us of the moment when the historical Buddha reached enlightenment. Therefore, the visitors coming to the stupa should develop trust in their own Buddha nature and their own potential to reach the goal and to recognize the nature of their own mind.

All the stupas always manifest the victory of enlightened wisdom over the suffering of ignorance. The outer structure of a stupa has a deep meaning at many levels. Buddhists circumambulate it while expressing their deep wishes as if being in front of Buddha himself.

The Enlightenment Stupa in Tenovice was constructed from granite, a very old stone typical for the region of the Czech Republic and Central Europe. It consists of blocks of stone fitting perfectly with each other, without the concrete skeleton which we are used to in modern stupa construction.

To finish the stupa successfully, it took one year of preparations and three weeks of building and filling of the different stupa levels by Rinpoche.

In addition to the completion and inauguration of the stupa, a meditation course took place in Tenovice. Maniwa Sherab Gyaltsen Rinpoche was also kind enough to give teachings on stupas, their meaning and the tradition of stupa building. The whole event was concluded with an empowerment of Guru Rinpoche.