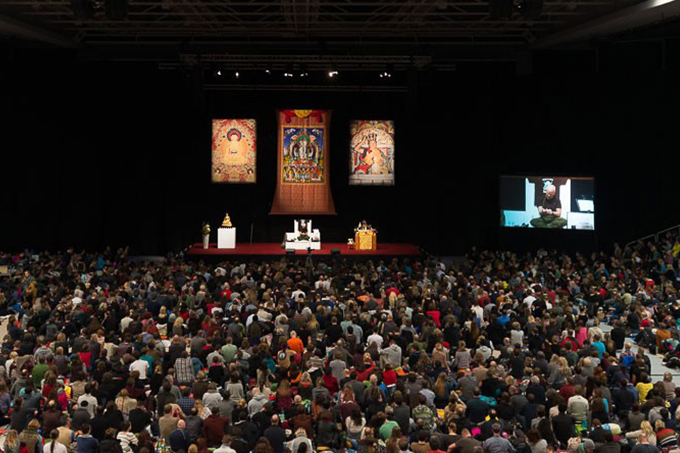 Over 3,500 Diamond Way Buddhists gathered in Hamburg for the New Year’s Course 2014. The program was opened by Lama Jigme Rinpoche, H.H. Karmapa’s representative in Europe, and brother of the late Kunzig Shamar Rinpoche. Jigme Rinpoche passed on the transmission of Milarepa, a great yogi of ancient Tibet, through an empowerment ceremony, and taught on the Karma Kagyu transmission lineage.

Lama Ole Nydahl continued by teaching Mahamudra, the practice of highest enlightened view. He also meditated with his students and answered their questions. Celebrating New Year’s Eve with his students, Lama Ole also read his annual New Year’s letter and gave the Bodhisattva promise, a vow to develop and work for the benefit of others.

During the whole course, another special program took place at the Hamburg Buddhist center: A new statue was set up and inaugurated in the meditation hall. The 1.7 meter tall statue of the historical Buddha Shakyamuni was built in Europe and is the second of six identical statues to be erected in selected Diamond Way Buddhist Centers throughout Europe. The statue’s inauguration took place under the guidance and with the generous support of Sherab Gyaltsen Rinpoche, a highly respected Karma Kagyu lama from Kathmandu, Nepal, who had already inaugurated the first statue of the series at the Europe Center this summer. On site, Lama Ole with a team of Western statue fillers performed the traditional preparations. These include the careful filling of the statue with relics, rolls of mantras written on paper, and beautiful items prepared and collected by Diamond Way Buddhist centers around the world. On the last day of the year, Lama Ole inaugurated the statue. As we later found out, it was a very auspicious day as it was exactly 40 years after the great 16th Karmapa performed the first Black Crown ceremony in Germany, some 60 km from Hamburg in 1974.