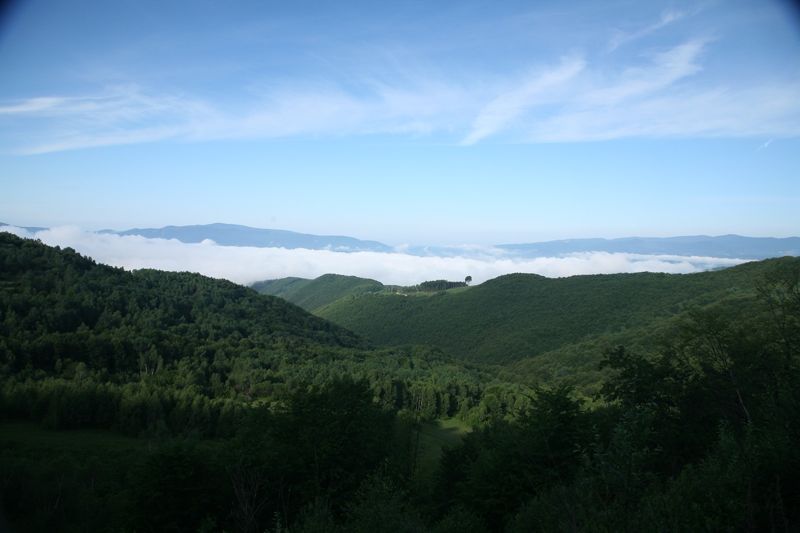 Written by the Ukraine Buddhist sangha

Znamin is a Buddhist retreat center area in Carpathian Ruthenia in western Ukraine. There are 25 hectares of meadows and forests located on a lovely hill situated at the altitude of 720m with a breath-taking 360° view of the eastern range of the Carpathians – one of the highest mountain ranges in Central Europe. A view onto Ukraine, Poland, Slovakia and Hungary stretches out from Znamin.

Znamin is the essence of the Carpathians
– Lama Ole Nydahl

The Znamin Buddhist center is a great place for international co-operation. European Union citizens and Russians can come to Ukraine without a visa, so it’s easy for us to invite friends from various countries to courses on Buddhism in Ukraine.

In 1996, Lama Ole Nydahl taught a Phowa course not far from Uzhgorod. (Phowa is a rare and advanced meditation, which prepares students of Tibetan Buddhism to die consciously.) The local highland scenery reminded Lama Ole of happy moments with his wife Hannah in Sweden. From that moment we started looking for land for a Buddhist center in that area.

In 2003 we found the land, and only twelve or so months later we obtained a permit for the construction of a house in a village situated beneath a hill, called Vilshinky.

Lama Ole and Hannah visited us in 2006 and called Znamin “The Land of Amitayus”. Soon after that we completed reinforced concrete works on a two-storey house, a base allowing us to meet there, develop further the center’s infrastructure and make friends with the local community.

At the beginning, only a small Uzhhorod sangha was handling all sorts of works in their vicinity – expanding their own center and managing Znamin as well as construction works in Vilshinky. For that reason in February 2012 in the Europe Center Lama Ole made a wish that Znamin would become an international project and invited neighboring countries feeling a connection to Ukraine to co-operate – mainly Belorussia, Czech Republic, Hungary, Poland, Slovakia. Austria and Moldova also engaged in the project.

Check out our website for more information on the Znamin Buddhist retreat centre or like us on www.facebook.com/ZnaminRetreatCenter. We look forward to seeing you at our working weekend on 20-22 September, or on the next course!