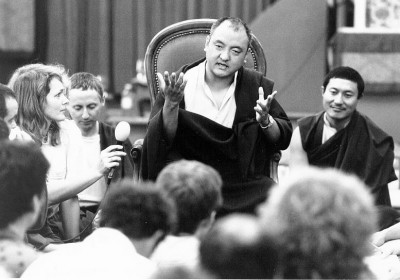 When a Buddhist teacher passes away, it is traditional for their students to make wishes for their swift rebirth.

We wholeheartedly wish that our teacher the 14th Shamarpa not take rebirth in a different realm or otherwise delay, but return as soon as possible to teach and bless us.

His Holiness the 17th Karmapa Trinley Thaye Dorje has written a special prayer for the swift rebirth of Shamar Rinpoche, which is published on his website karmapa.org in Tibetan, Chinese and English.

The English translation is given below.

Swift Rebirth Prayer – “Supplicating the factual word of a Saint”

The Buddhas and Bodhisattvas of limitless purelands,
Their wisdom and compassion embodied by the direct and indirect assembled Gurus,to them
And to the Three Jewels and dharma protectors, the true source of refuge,
With one-pointed devotion, I supplicate with my three doors.

The embodiment of all Buddhas, the lord of Dewachen,
Emanating in boundless, immeasurable manifestations,
Lord Chökyi Lödro, the embodiment of the Three Families,
May you appear on the crown of the head of privileged sentient beings!

Compassionate power arising from the deep and vast expanse of wisdom,
The supreme emanation, compassionate towards all beings,
Lord of the Three Families, inseparable from the Three Secrets,
May you return swiftly, Lord Chökyi Lödro!

Benefiting limitless sentient beings in limitless kalpas,
Accomplished the bodhisattva’s activities, and
Attained the supreme stage of unity, in limitless realms,
May you return swiftly as the manifestation of these activities!

Particularly holding the traditional teachings of Dhagpo Kagyu,
The one who is incomparable in carrying out the Buddha’s teachings,
Chökyi Lödro, the very root of the Practice Lineage,
May your Nirmanakaya return swiftly!

By the blessing of the truth of the infallible Three Jewels,
Mahakala and his consort with their assemblies,
By the power of their unobstructed activities,
May all my aspirations be fulfilled as they were made.

May all that is virtuous and good flourish!

This is the prayer for the swift rebirth of the reincarnation of the late Kunzig Shamar Mipham Chökyi Lödro. Due to the request of the general secretary of His Holiness the 17th Karmapa, Jigme Rinpoche, all the Rumtek Sangha,and the Sangha of the Lhadak monastery, Karma Chokor Drug Gyud Ling, I, the 17th Karmapa, have composed this prayer with whole-hearted supplication on the precious full moon day of 13th June 2014 (15th day of the 4th month of the Tibetan calendar