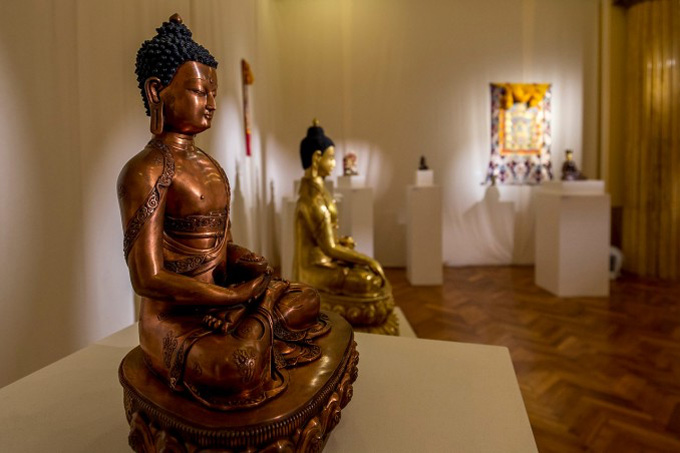 The art of Tibet is closely connected with Buddhism and meditation. It’s usually perceived only on the outer level of aesthetic beauty, but it also includes inner meaning on many levels. The facial expressions, postures, and attributes of the Buddhist aspects shown in Buddhist art embody various kinds of enlightened qualities – qualities that are actually intrinsic to mind.

For example, when a statue has one face, this expresses the indivisible nature of all phenomena. Two faces represent the two truths: relative and absolute. Three faces symbolize the three Buddha states, and four faces show the four sides of enlightened love: loving-kindness, compassion, shared joy and equanimity. So, the composition and form of these art works isn’t really an expression of the artist’s creativity. Artists follow traditional instructions, with the aim of helping people who meditate on the artwork to recognize in themselves the enlightened qualities that are represented in the art. In a similar way to how meditation instructions are passed on, the art of statues and scroll paintings has been transmitted from master to student for many centuries. That’s why authentic statues and thangkas (scroll paintings) are very precious. (See also the article Restoring Buddhist frescoes in the Copenhagen meditation hall)

It took over a year to organize a Buddhist art exhibition in Bratislava. It was named “Space & Bliss” and it was prepared by an international team.

Over 185 statues, thangkas and ritual objects were exhibited. All the artifacts come from private collections or Diamond Way Buddhist centers and are used in meditation practice. The exhibits represent basic motifs in Buddhist art. They range from big Buddha statues to a 300-year-old thangka displaying a special eight-armed form of Loving Eyes (Asta-bhujah Avolókitéśvara). Some of the Buddha forms pictured in union triggered curiosity among the journalists, who later wrote that “sex can be also enjoyed by a Buddha”. However, on the Diamond Way level of Buddha’s teachings, these forms represent the perfect union of the “female” and “male” principles of wisdom and compassion, space and bliss. As well as the exhibition, the visitors enjoyed a colorful additional program: meditations, guided tours, lectures, screenings and workshops. Each visitor had the chance to make their own Tsa-tsa, a Buddhist form made from plaster. There was a rich program for the whole family, another local newspaper concluded.

The exhibition was originally planned to last one month, February 2015. The museum suggested an extension due to the enormous interest of the public. Thus we gained 3 extra weeks. The exhibition was a great success and attracted the interest of the public and media: Slovak news TV, Slovak radio, all the important newspapers and many websites featured it. Many people watched the video on the exhibition, and overall, more than 9,000 people visited the exhibition. Everybody who got inspired to know more about Buddhism and meditation is welcome in our Buddhist center in Bratislava (see also the article New Buddhist Center bought in Bratislava, Slovakia).