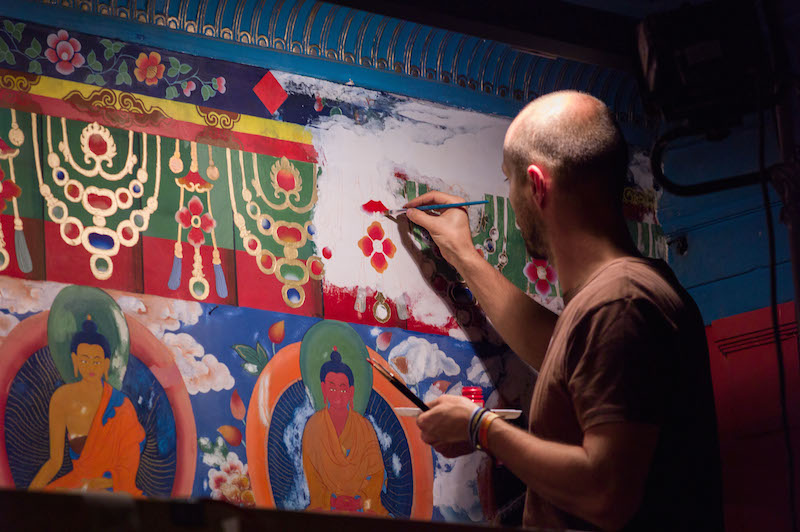 The Copenhagen Diamond Way Buddhist Center was founded in 1973 – over forty years ago. It was the second of the now 600-plus Diamond Way Buddhist centres to be established after Lama Ole Nydahl and his wife Hannah came back to Europe after studying with the 16th Karmapa Rangjung Rigpe Dorje. Therefore it is not surprising that there is already a need for restoration.
There are few Buddhist centers in the West with such authentic Buddhist frescos of the style traditionally used in the monasteries of Tibet – and this makes saving them even more urgent.
Most of the wall paintings in Copenhagen were made by Rinzing Lhadipa, an artist from Sikkim recommended by 16th Karmapa himself, as he had worked for him for many years before. In 1976, he came to Copenhagen and spent many months painting various Buddha forms as well as scenes depicting the life of Buddha Sakyamuni. These paintings belong to the “Karma Menri” style of Tibet.

Coming to Copenhagen to paint at that time, Rinzing Lhadripa asked for mineral pigments that could only be bought in Paris. Therefore, the students went there and brought them from France. The recommendation was not to use the pigments directly on the wall, rather to paint on a canvas in order to protect the pigments and the paintings from humidity that could damage them later.

However, the paintings were made in order with Tibetan tradition and painted directly on the wall. Thus now, forty years later, there is an urgent need for restoration.

Lama Ole Nydahl asked Leo Grzyb and Kateřina Blaháková, artists from the Czech Republic, to repair the wall paintings. Since 2013, they have regularly visited Copenhagen in order to spend some weeks restoring the frescos. During their recent visit in October 2014, they repaired the paintings of ornaments, offerings and Buddhas that were most damaged.

Leo Grzyb was made responsible for the restoration as he was trained in the Karma Gadri style – the later continuation of Karma Menri – by Denzong Norbu, a contemporary master in the art of Buddhist scroll paintings (thangkas).

Denzong Norbu was asked to finish the paintings in the meditation room and hall after Rinzing Lhadripa died in Copenhagen in 1977. Therefore, Leo was able to take part in the painting of Dewachen – the pure land of the Buddha of Limitless Light – with his teacher Norbu, and he is now focusing on the renovation of the older paintings of his predecessor.