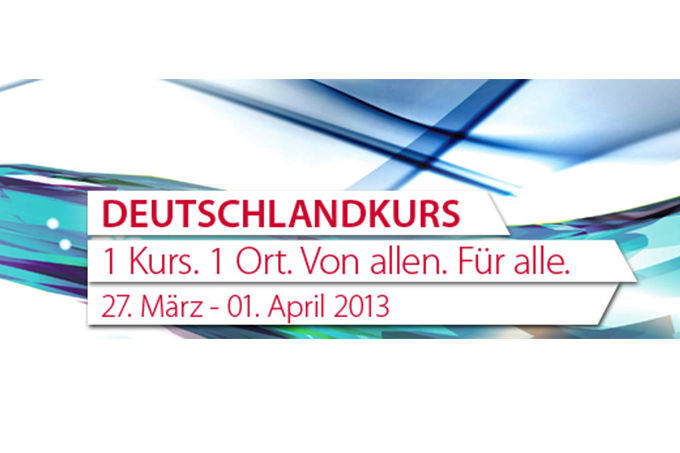 For the first time in five years, German Diamond Way Buddhists are jointly organizing a meditation course. The so-called Deutschlandkurs (Germany Course) with Lama Ole Nydahl will focus on how to pass Buddha’s teachings on to others. It will take place at the Kassel trade fair halls from March 27 to April 1.

Twelve thousand square meters of exhibition space make it possible to offer everything on site for up to 3000 expected visitors: Buddhist lectures, space for meditation, catering, child care, several accommodation possibilities like indoor camping in tents, on provided camp beds or in private motor homes on one of the 3000 free parking spaces. Green surroundings and a lake allow for pleasant breaks and walks. Lama Ole Nydahl will stay on the premises too.

Not consumers, but producers of Buddhism

A main focus of the course will be how to pass Buddha’s teachings on to others. Lama Ole Nydahl and several lay Buddhist teachers—some of his students, experienced Buddhist practitioners whom he asked to teach Buddhism in Diamond Way centers—will be explaining how to do this in a both accurate and understandable manner, following the oral transmission of the Karma Kagyu Lineage of Tibetan Buddhism. “Everyone of us will be someone else’s first contact with Buddhism. Therefore, we should be able to tell them what it is all about”, says Lama Ole Nydahl.

The same spirit applies to the course organization: “We not only want to organize a course for Buddhists, but with Buddhists,” chief coordinator Christian Friederich from the Buddhist Center Kassel explains. This means that every one of the 136 Diamond Way Buddhist Centers in Germany has been invited to take responsibility for a certain organizational task, so that only a few jobs remain to be distributed among the participants once the course has started.

“Back to the roots”

While all other previous courses in Germany have been organized either by one of the seven regional Diamond Way Buddhist associations or on an international basis, the “Deutschlandkurs” will be the first national effort since 2007. “Besides that, the choice of location also means going back to our roots”, says Christian Friederich: exactly 20 years ago, in 1993, the first national gathering—the so-called “Summer Course”—was organized at a rented scout camp site 20 km away from Kassel, a city right in the geographical heart of Germany.

With 300 participants in 1993, the meditation course soon became a fixed entry in almost every German Diamond Way Buddhist´s calendar, and grew bigger year after year. When the number of 2,000 participants was exceeded in the new millennium, the need for Diamond Way Buddhists from all over the world to meet and work together closely had become evident. As a result, the Summer Course was changed to a truly international format: the “International Buddhist Summer Course”  has taken place at the Europe Center near Immenstadt in the foothills of German Alps since 2008.

As audiences have become more international, the language of the German Easter and autumn courses with Lama Ole Nydahl has also been changed to English. The new whole-Germany meditation course Deutschlandkurs replaces the Easter course and is one of the few chances to listen to Lama Ole in the German tongue – a language he appreciates both for its powerful terms with age old roots and for its precision, which allows the expression of philosophical thought in great detail. Simultaneous translation into other languages will be provided as well.